Hook the Boys on Reading! 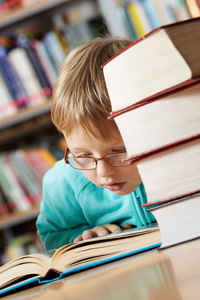 Remember that reading is a social activity.  Your older boys, with guidance and instruction from you, can have meaningful conversations around rich texts. Model this with your own read-alouds and then offer book choices with engaging plots and complex characters.  Help your boys to draw out those parts of the book that they find surprising or fascinating and give them opportunities to talk about them in a safe environment like a boys-only literature circle.  Boys do have strong feelings simmering inside of them, and it is up to you to create a space for them to express them.

You might want to consider teaming up with another teacher in your building or your district, even with someone in another state.  With tools like blogs and a safe, closed environment like edmodo, your students can carry on conversations with peers around common books or themes and you can assess their learning.

Readkiddoread is a site you'll want to use with your older students, and recommend to parents as well.  Started by author James Patterson because of his own son's reluctance to read, it offers book suggestions by age group and by book type.  It also features author interviews, helpful lists, sneak peeks of chapters from yet-to-be-released books, and lesson plans and other materials for educators and parents.  The site is crisp, clean, colorful, and easy to navigate.

Upper elementary students may also have the skills to respond to their reading in other ways, using technology.  Consider having your boys produce short podcasts using a tool like podomatic. Another option is to create “fake” facebook pages for the characters in a book.  There is even a Google Docs/Drive “fakebook” template in presentation format to use if you prefer. Click “Use this template” to bring it into your Google Drive/Docs account).

If you watch the video version of a book as a culminating activity or a documentary related to the content or theme of a book, allow students to use back-channeling as a way to respond in real time and assure that everyone's voice is heard.  This article will supply you with details.

Many authors now offer free or inexpensive visits via Skype.  If a book appears to be going over really well with a group of students, look into a virtual author visit as an extension of the reading.  Find help with Skype author visits here.

Use Writer’s Workshop time to dovetail what’s happening in Reader’s Workshop.  Here are some suggestions for follow-up writing:

Barton, Chris. The Day Glo Brothers. ISBN: 9781570916731 Lexile: 990
Here's a true story that highlights the special bond that exists between brothers.  Bob and Joe Switzer have two very different personalities, but when they team up and combine their talents, the results are, well, glowing!  Boys who like to tinker and solve problems will relate to the Switzer boys' tenacity as they experiment with ultraviolet light and paint, eventually creating day-glo colors.

DuPrau, Jeanne. The City of Ember (and two others in the series) ISBN: 9780375822735. Lexile range for the series: 680-760
The city of Ember was meant to be the final refuge for the human race, and after two hundred years the lamps that light the city are growing dimmer.  Lina and Doon are convinced that they hold the answer to their city's survival –if they can just decipher the piece of an ancient coded  message Lina found.

Gutman, Dan. The Genius Files: Mission Unstoppable. ISBN:  9780061827648. Lexile: 720
Twins Coke and Pepsi McDonald are unwilling recruits to solve the world's problems because of their “genius” status.  In this first adventure, they have moments of peril involving cliffs, poisoned darts, and burning buildings as they try to avoid capture.  Written in a tongue-in-cheek conversational style it'll keep your boys turning the pages.

Horowitz, Anthony. Stormbreaker (and others in the Alex Rider Adventures series)  ISBN: 9780399236204.  Lexile range for the series: 610-780
This is a spy thriller with cliff-hanger chapters and a fast pace.  Fourteen year old Alex Rider's uncle and guardian is murdered, and Alex discovers that he was not the man he appeared to be.  Alex is coerced into completing his uncle's last spy mission for the British government; he receives specialized training and an assortment of spy gadgets.  Villains, hit men, and high speed chases make for a satisfying read.

Jacques, Brian. Redwall (and others in the series) ISBN: 9780441005482. Lexile range for the series: 600-1010.
Boys will enjoy the adventures of Matthias, a mouse whose quest is to save his friends at Redwall Abbey from the story's villain-- Cluny the Scourage, a rat.  Here they'll find rich
vocabulary, mystery, daring escapes and close calls, and moments of despair, as they root for the book's likable hero.

Korman, Gordon. Swindle. ISBN: 9780439903448.  Lexile:710
Eleven year old Griffin Bing is swindled out of his most valuable baseball card in this action-packed story.  What to do?  Recruit some buddies, of course, and steal it back!  With guard dogs and high tech security guarding the compound of the con man who swindled it, the boys won't have an easy time restoring justice.

Patterson, James. The Angel Experiment (and others in the Maximum Ride series)ISBN: 9780316067959. Lexile range for series: 660-770
Angel is the youngest in a “flock” of kids who are able to fly, and she is kidnapped and taken back to the school where experiments were once conducted on members of the flock.  Fourteen year old Max, the central character in the series, and the others team up to rescue Angel in Death Valley, California only to tackle new problems and villains in New York City—the “Erasers,” a band of creatures who are half wolf, half human and out to destroy the flock.

Riordan, Rick. The Lightning Thief (and others in the Percy Jackson and the Olympians series) ISBN: 9780786856299 Lexile range for the series: 590-740.
When things at school get increasingly tougher for Percy Jackson and his life is threatened, his mother sends him away to Camp Half Blood.  It is there that Percy learns that his father is Poseidon, god of the seas.  At this camp for demigods, Percy finds new companions who accompany him on a quest across the United States in search of the gates of the Underworld.  Will they be able to prevent a devastating war between the gods?

Sage, Angie. Magyk (and others in the Magykal Septimus Heap series)ISBN: 978006057739.  Lexile range for series: 640-960
Septimus Heap is the seventh son of a seventh son (and thus has magical powers) and he mysteriously disappears the night he is born, eventually becoming an apprentice to the Extraordinary Wizard.  Sage weaves a tale with boggarts, villains, wizards, spells, and a huge cast of characters who help to battle Darke Magyk.  Fans of fantasy, action, and humor will love Septimus's adventures.

Scieszka, Jon. Knucklehead. ISBN: 9780670011063.  Lexile: 750
The front cover alone of this memoir is enough to motivate some of your boys to read it! Popular author and founder of the guysread website Jon Scieszka recounts true (and mostly true) tales from his childhood.  Living with five brothers, going to Catholic school, and having a dad who was an elementary school principal makes for a laugh-out-loud read!