A Colonial Tour from TeachersFirst: Boston 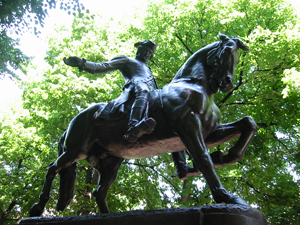 Boston was the largest of the colonial New England cities, and it became a focal point for opposition to English policy toward the colonies. Paul Revere, the Boston Tea Party, and the Boston Massacre have all become famous as elements leading up to the break from English rule.

Boston is still a major city with many historical and cultural attractions. There are all sorts of things to see. The links below will help you find the places that were important during the colonial period.

Share  Link
National Park Service's site on the Boston Freedom Trail and Guided Tours. ...more
Here is the direct link to share this resource review. Feel free to copy and paste this URL into an email or place it on your web page or blog so others can read this TeachersFirst review:

Add your comments below (available only to members) | Become a Member

Add to My Favorites

You must be registered and logged in to add items to your favorites.
Use the form at the top of the page to log in, or click here to join TeachersFirst (it's free!).