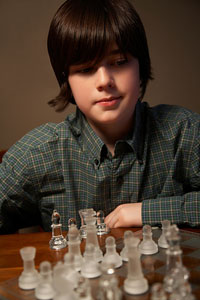 How many times have you felt that Math suffers from a lack of "fun stuff?" The Social Studies and Science teachers get all the field trips; Math deserves a place in the "awesome file" too. So I decided to celebrate Math in a big way.

This is an ongoing project designed to span an entire school year. The great news, however, is that it is easy, fun, and challenging for your students.

Audience:
Math Celebration is designed for top-level students in fourth through eighth grades.

How it Works:
Math Celebration originated as an end-of-the-marking-period strategy. I asked students to create a game (either individually or working in groups) based on the math concept taught during that marking period.

These math games quickly became a part of a behavior modification program. In my Math classes, we have Fun Fridays. Since the class typically has thirty students vs. one of Me (yikes!), if they make it through the week with fewer than five "checks" on the board for unruliness, they get to have Fun Friday. During this time, we only play or create math games. It’s a day off from lectures and drills, and it also gives me time to watch students creating and solving problems.

During these Fun Fridays, I realized that we could take the students’ game creating a step further by combining Math with Language Arts. (Isn’t that every teacher’s dream?) Thus, the Math Celebration Fair was conceived.

Students create their games during the first three marking periods based on the material they are learning. They present their games to the class for a grade and for their peers to test, critique, and improve. The real fun begins at the end of the third marking period. At that point, each child student chooses a game he or she has created (or begins a new one) and begins developing a well-rounded campaign to advertise, improve, and commercialize that product.

The finished games, promotional materials, and related products are all presented in a Math Celebration Fair at the end of the year. During this Fair, I typically have several outside judges come in to compare and judge the various games. Prizes go to the winners!

How to Set Up Your Math Fair