Highlighting Our History: American Revolution Read-alouds PLUS for the Common Core 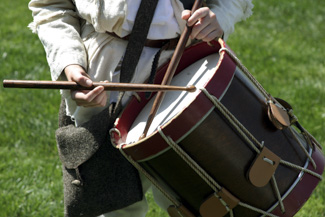 Borden, Louise.  Sleds on Boston Common.  ISBN: 9780689828126.  Lexile: 640.
Nine-year-old Henry Price is the narrator for this book about a young colonial boy in Boston who stood up to General Thomas Gage on behalf of the children in the winter of 1775-76. Based upon Boston folklore (with specifics given in an author’s note), it shows the impact of the war on the daily life of children. Henry receives a new sled for his birthday and becomes tired of the way that encamped British troops on Boston Common interfere with sledding. Henry approaches the General calmly and resolutely, and the General responds in a polite and reasonable manner; a victory for the children is won.

Writing extension:  Capitalize on the popular graphic novel format and have students retell Henry's story using Comic Creator. It has a simple interface and student work can be printed. Once printed, students can modify by drawing period clothing and objects. Graphic novel printable templates are available at another site, as well as other graphic novel resources from author Lynn Plourde.

Gauch, Patricia Lee.  This Time, Tempe Wick?  ISBN: 0-329-35025-0. Lexile: 740.
Based on true events and a real colonial girl, Gauch skillfully helps readers realize that war is complicated and that it isn’t simply “good guys vs. bad guys.” In January of 1781 Temperance Wick (whose family were Patriots) has to take matters into her own hands when wintering colonial soldiers near her family farm begin a mutiny. Disgruntled soldiers en route to Philadelphia try to steal her horse Bonny, but this surprising girl manages to hide the horse inside the family home for three days, right under their noses.

Writing extension 1:  Teachers wishing to have students practice a literature response about a character will find this book useful. Gauch sets up Tempe’s character traits beautifully, and reminds the readers about them often. Students will easily find evidence for an explanatory piece that answers this prompt: “Explain what kind of a girl Tempe is, using evidence from the text to support your ideas. Also explain how these traits helped her during the incident with the soldiers.”

Writing extension 2:  In the author’s note, Gauch says, “War is never simple. A large war is made of many small wars…” Ask students to write a response to the author’s claim using evidence from Tempe’s story.

Roop, Peter and Connie.  Buttons for General Washington. ISBN: 978-0-329-23926-8.  Lexile: 460.
The Darraghs, a Quaker family who lived across the street from a British general in occupied Philadelphia in 1777, become spies as a way of helping their oldest son to stay safe as he serves in Washington’s army. Fourteen-year-old John Darragh sets out to deliver messages encoded by his father and sewn into buttons by his mother. The mission is a dangerous one, as John must get past some British guards. In a scuffle with a Loyalist boy who taunts him, John loses a button. He has a close call with a guard, takes an alternate route, and gets caught in the woods.

Extensions: This story has enough action and suspense and “spy appeal” that middle elementary students could take the highlights and turn it into a Reader’s Theater script. Have students work in small groups to write a script (or adapt the text yourself) and then prepare a performance for practice with the Speaking-and-Listening standards. Record and post these on your class website or blog.

Turner, Ann. Katie's Trunk. ISBN: 0-329-09836-5. Lexile: AD660.
This text, based on an incident involving one of the author’s ancestors, provides another example of the complexities of war. Katie and her family are Tories, and they find themselves at odds with neighbors they once helped and who helped them. When angry Patriots come to ransack her home and steal goods, Katie hides in a trunk. In a tense and suspenseful moment, both Katie and the reader see how John Warren “got the goodness straight.”

In addition to telling a good story, this text provides an opportunity to introduce or review aspects of the writing standards that deal with craft and structure. The author uses a number of similes to set the tone for the book and help readers to understand Katie's feelings and the seriousness of her situation. Have students find those in the text and discuss how they aid comprehension.

Writing connection 1:  Have students write a short explanatory piece using this prompt: “Use Katie's story along with other facts you have been learning about the Revolutionary period to explain the meaning of this saying: “There are two sides to everything.”

Writing connection 2:  Have students write poems for two voices—either alone or with a partner.  Each could take on the persona of a character at odds with the other. Model first with the whole class, perhaps using Katie and John Warren for characters. Brainstorm other pairs that might work from this time period (son who wants to enlist/mother who wants him to stay, Patriot soldier/British soldier, Patriot shopkeeper/Tory customer, General Gage/Henry, etc.). Recitations of the poems provide good practice, too, for the Speaking-and-Listening standards.

Jurmain, Suzanne Tripp. George Did It.  ISBN: 0-525-47560-5. Lexile:NC760.
Jurmain’s humorous text portrays Washington as honest, dependable, and (upon being asked to be President) nervous. Use it to discuss the central message or theme—that George Washington stepped up and always did what his country required of him.

As a class, discuss the answers to these questions and then consider assigning the writing prompt below:

Find places in the text that are funny. But, being President is serious business. Why do you think the author chose to tell the story of Washington’s nervousness in a humorous way?

Writing prompt: “The author tells us that George had spent fourteen years of his life in public service—as a trainer of soldiers, the Commander-in-Chief of the colonial Army, as part of the group that designed a new government and wrote the Constitution, and ultimately as President. Imagine what it might have been like to be the son or daughter of such a busy, important person while you were growing up. Think about all the time he would have been away from the family and what that meant for you—extra chores perhaps, missed birthdays, no one to answer some of your questions, etc. Remember what you have learned about the reasons why the Revolutionary War was fought. Write a short letter to a cousin (or friend) in which you share some feelings about all of this. Use parts of this text to help you, as well as what you have learned from other readings and class work from this time period.”

Back to Help I Lost My Library/Media Specialist